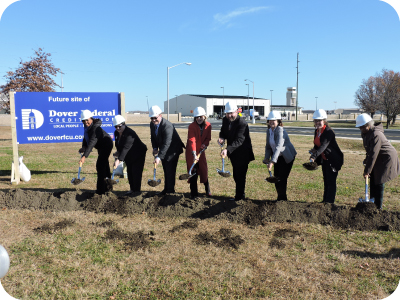 Dover, DE: Dover Federal Credit Union was first chartered in 1958 by a handful of Air Force and civilian workers at Dover Air Force Base. Since 1958, Dover Federal has had a presence on the base, and truly has bought into the culture that has been birthed there. On Friday December 2, 2016 Dover Federal added to their legacy on base by breaking ground on a new 2,400 sq. ft. branch that will be located next to the gas station at 418 Atlantic Street Dover AFB, DE 19902. Construction is set to officially begin in December of 2016, with a projected date of completion of July 2017. Dover Federal CEO Chaz Rzewnicki stated that “being able to expand the branch is a symbol of not only our growth, but of the continued commitment to better serve our military by making them the TOP priority.”

This is a great credit union. The employees are friendly and do their job well. The rates are great and the fees are low. I will never use a regular bank again!